Special Purpose Acquisition Companies, or SPACs, have been steadily rising in prominence over the last year, earning headlines with a number of eye-popping capital raises and making acquisitions that took high-profile companies public, including Virgin Galactic and electric carmaker Nikola. Previous, a relatively niche investment vehicle, many cannabis and hemp industry operators are still not clear as to how these investment companies operate, and what one should do if approached by a SPAC for an acquisition. In the following we will lay out the basics of SPACs and provide key considerations for cannabis operators and entrepreneurs approached by, or courting, investors.

The fundamentals of SPACS

Simply defined, a SPAC is a shell company formed by founders/sponsors in order to raise investments through an IPO to acquire an existing company/companies. The key players involved are:

As a regulatory stipulation, the Target company cannot be identified at the time of the IPO, and investors pour money into this instrument mainly on the basis of the founders’ reputation and the sector of investment – thus SPACs are also known as ‘blank check’ companies.

SPACs have many safety criteria for protecting investor interests. For example, investor money is generally kept in escrow in an interest-bearing trust account, and can be used only for acquisition purposes. The interest is used to cover certain operational SPAC costs until a transaction closes. Also, SPACs are time bound – a SPAC typically has two years to complete an acquisition or face liquidation, in which case the money is returned to the investors. (However, this period is extendable upon meeting certain conditions.) And finally, for the M&A transaction to be regulatory admissible, the fair market value of the target company must be 80% or more of the SPAC’s trust assets.

SPACs are generally beneficial to all parties concerned: sponsors/founders get liquidity to implement their ideas as well as ‘founder shares’ for their efforts; investors get an ‘expert’ backed investment platform to invest in; and the target company gets sound management expertise and liquidity. The IPO process is also faster for SPACs compared to traditional IPOs due to simplified documentation and listing procedures. 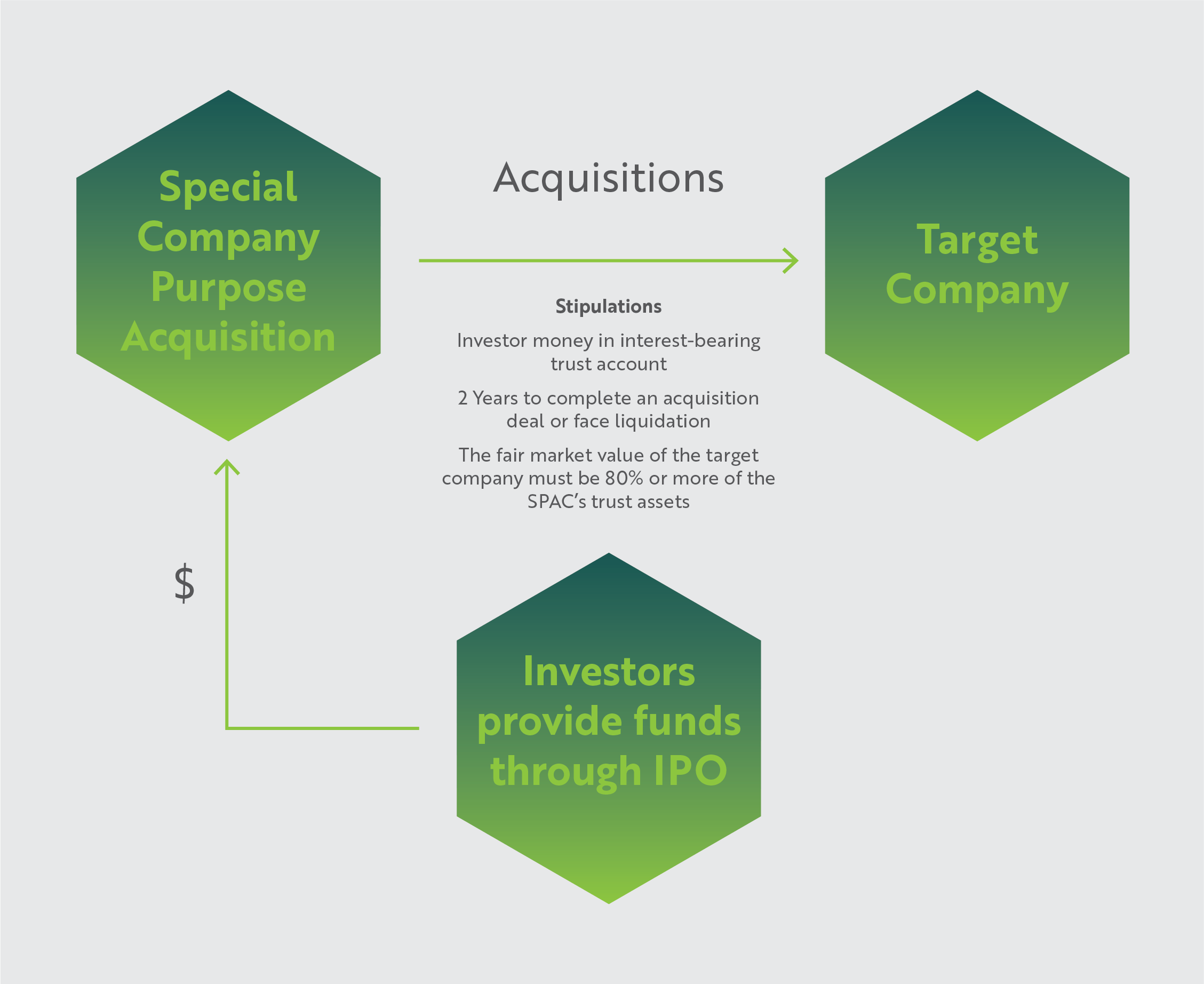 History and Growing Popularity of SPACs

SPACs have been in existence since the 1990s, but they became more popular in the early 2000s when entrepreneurs and mid-market public investors started seeking out private equity alternatives, more direct market options for raising funds, as well as suitable risk return options. Nowadays, SPACs are increasingly being used in various industries, to take companies public, and in situations where financing is scarce. At the moment, SPACs are having a major impact in technology and other high-growth sectors, exemplified by transactions involving DraftKings, Virgin Galactic, and Nikola. In the United States, the SPAC public offering structure, like many other financial instruments, is governed by the Securities and Exchange Commission (SEC). 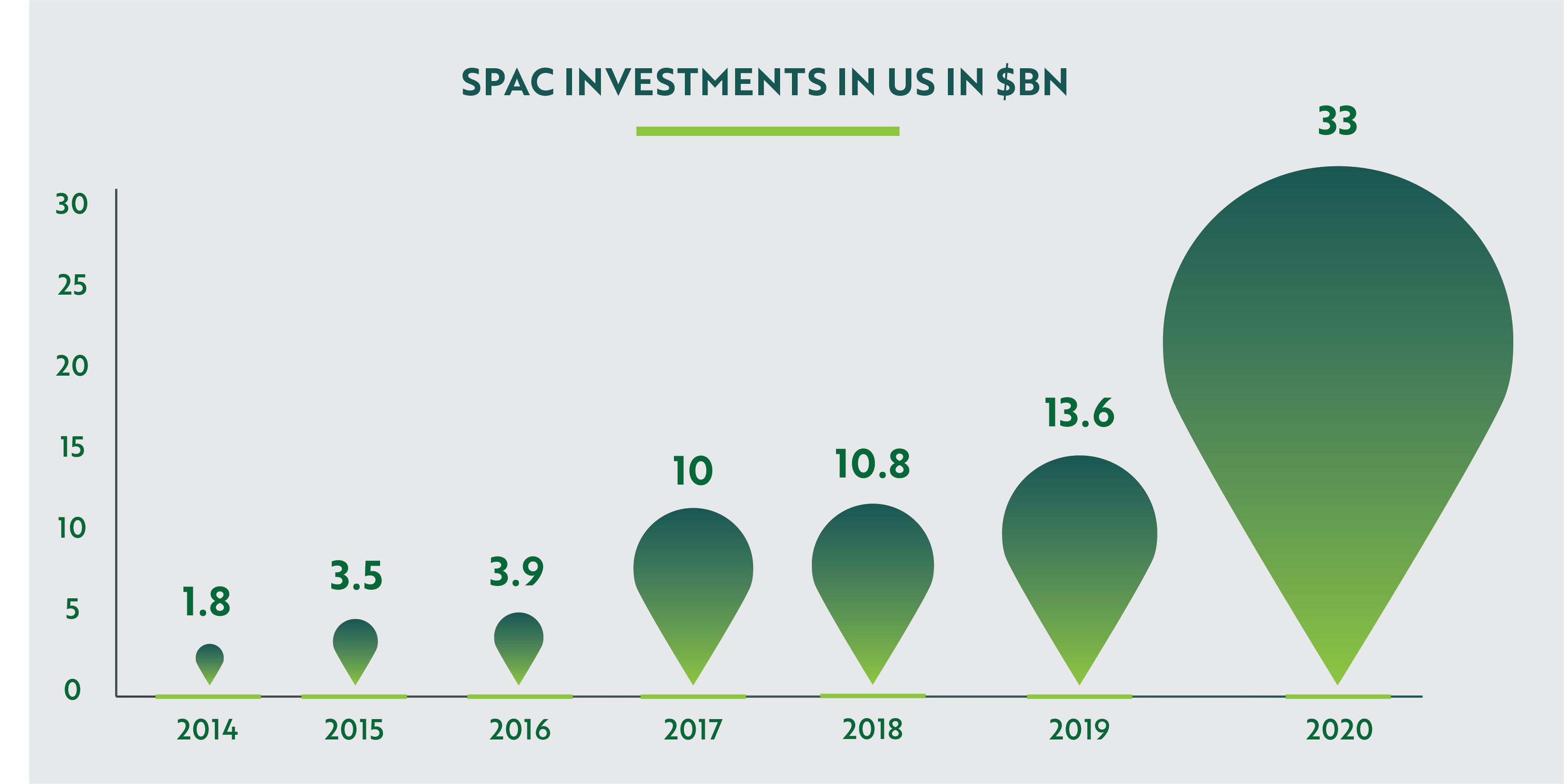 SPACs as a Force in Cannabis and Hemp

On May 1, 2020, founder and former CEO of Canopy Growth, Bruce Linton, rang the Nasdaq’s opening bell on the day he took his new venture public – a SPAC called Collective Growth Corp. – raising $150 million. While not the first SPAC to enter the cannabis space, Linton’s high-profile in the cannabis and hemp industries introduced the idea of SPACs to many industry operators and investors.
According to analysis provided by ELLO Capital, cannabis SPACs raised over $3 billion between June, 2019 and July, 2020. Not all of the funds have been utilized to date, so the clock is ticking on the ~two year window following the initial capital raise.

Considering the proliferation of distressed assets and companies struggling with the cash crunch, general economic turndown, and other complexities inherent to today’s cannabis industry, SPACs are likely to offer lifelines to a significant number operators – building new market leaders and reshaping the cannabis industry in the process. 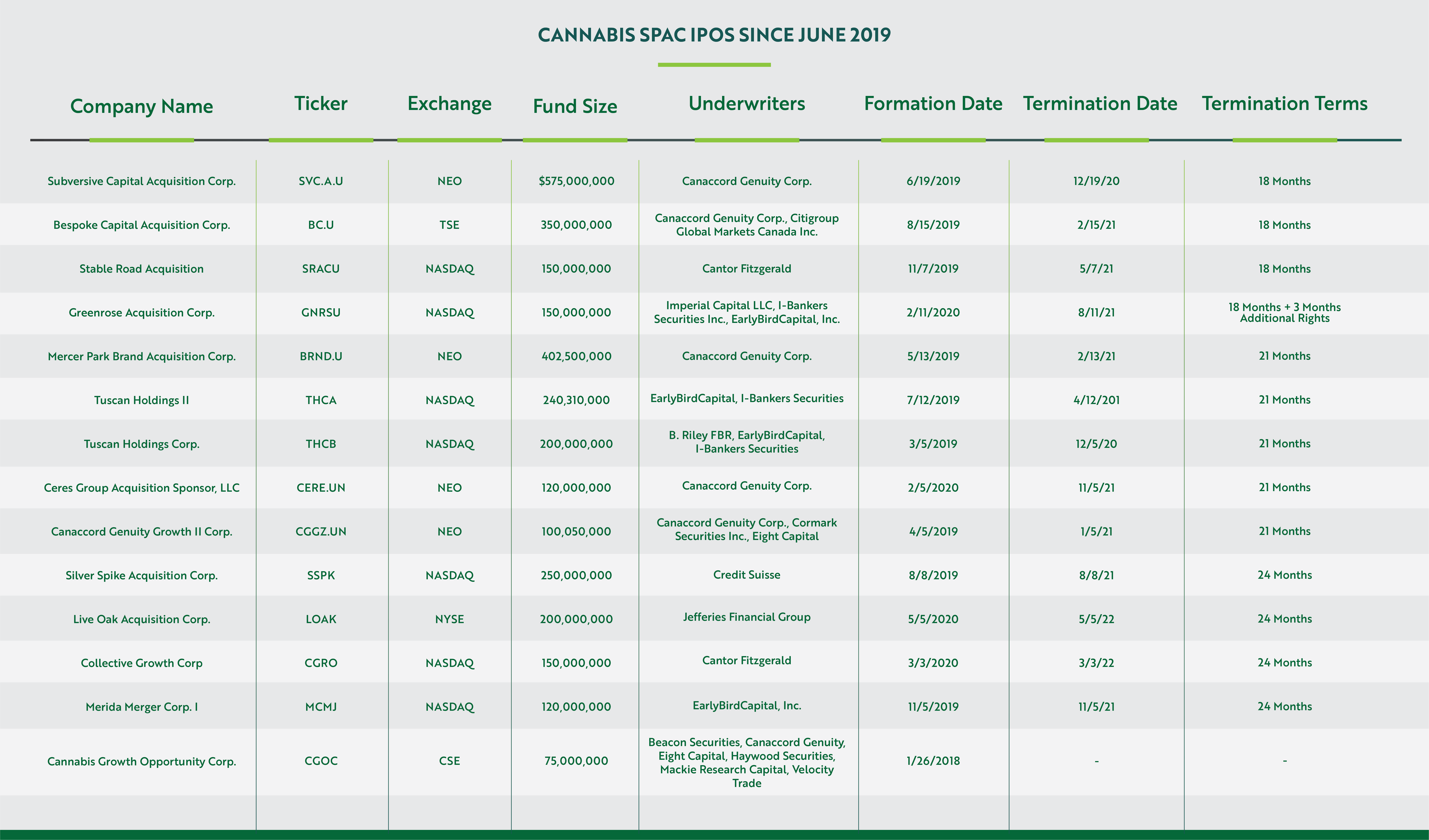 When a SPAC makes an acquisition, it can follow any of the standard transaction structures – asset acquisition, stock/share purchase, or merger – and the resultant entity combines the SPAC and the Target company into a publicly traded operating company.

So, what should cannabis and hemp operators and entrepreneurs do if approached by a SPAC for an acquisition? Of course, it’s a personal decision whether to go public or not, but for companies in need of liquidity or seeking an exit, merging with/selling to a SPAC can be quite advantageous, especially in the present market context. For one, a SPAC acquisition can help to raise the Target company’s sale price, due to increased competition as private equity and SPACs compete for the same targets. Furthermore, SPAC founders’ reputation and their choice of your company can also bring increased attractiveness/investor interest and richer valuations.

Since SPACs are traditionally led by experienced founders, the IPO process often runs smoothly and efficiently. Because there is typically no roadshow or series of investor presentations, the timeline and resources are more optimal than an IPO. And finally, for companies without experienced management, SPAC control can help provide the requisite expertise and talent.

It is important to note that SPACs listed on US exchanges, including Linton’s Collective Growth Corp, are necessarily focused on the legal hemp sector, since SEC regulatory guidelines prohibit adult-use and medical cannabis companies from going public in the US. However, several SPACs are listed on Canadian exchanges, which creates the potential for investments in US-based cannabis businesses.

In the last year, broad market conditions have elevated the importance of SPACs across all industries. The cannabis and hemp industries are no different and SPACs represent a welcome investment source in these tough times. SPACs are bringing investment back into the industry, importantly from ‘so far on the bench’ institutional investors, which is particularly important for companies who want liquidity at a time when other avenues are drying up.