The New Reality of Cannabis M&A

In the past 18 months, the cannabis and hemp industries endured a series of seismic upheavals that have changed the game for mergers and acquisitions (M&A). In 2019, a combination of market shifts, regulatory issues, and corporate governance scandals, resulted in 95 cannabis industry M&A deals, worth more than $2.4 billion, being cancelled or unwound. In 2020, the global health crisis, and subsequent economic fallout, has nearly brought a halt to cannabis M&A, with only 42 deals completed year-to-date, compared to the 215 deals completed during the same period of 2019.

Today, entrepreneurs, operators, and investors must navigate a new market reality defined by uncertainty created by the COVID-19 pandemic, the fallout from lower-than-expected financial performances from market leaders, and increasingly tight capital markets. In this environment, traditional business fundamentals reign supreme. Investors and markets that once rewarded the size and breadth of a company’s footprint, are now laser-focused on margins, EBITDA (“Earnings before interest, taxes, depreciation, and amortization”) and cash flows.

As a result, acquirers are more selective in their targets and working to emphasize greater operational, regulatory, and management efficiency by building out a presence in their core geographic footprint. In instances where buyers look outside their core markets, they are focused on assets that are distressed or expected to generate at a minimum positive EBITDA. The ultimate goal is to build on positive cash flows.

The buyer pools for sellers is limited and growing pressure has contributed to a broader range in valuations as sellers are more likely to be rewarded or punished for their specific strengths or weaknesses than in the past. These changes have also increased the number of companies that are simultaneously buying and selling assets as they reshuffle organizations to execute a more focused strategy. This reset is spurred, in most cases, by public equity pressure, and is welcomed by many as a positive change from the old “Green Rush” model.

Throughout the Cannabis M&A Field Guide, we will provide a variety of perspectives as we examine best practices, common pit falls, and other considerations that will make or break cannabis M&A deals in this new normal. But first, in order to ably navigate this new environment, we must understand how we got to this point – and where we are headed next.

Understanding the fallout from the “Green Rush”

2018 will likely be remembered as the original boom year for legal cannabis. California opened the largest adult-use market on January 1, and later that fall, Canada followed closely behind by becoming the first North American nation to legalize cannabis for adult use. Investor optimism was high as large numbers of both Canadian and U.S.-based cannabis companies went public on Canadian stock exchanges, and the first Canadian companies went public on U.S. exchanges. At the time, revenue projections were ambitious and companies traded at elevated valuations.

A number of cannabis companies, flush with cash from both public and private capital raises, engaged in a race for market share, acquiring operations and licenses across North America. A series of eye-popping M&A deals resulted, with acquirers shelling out millions to gain operational capacity and secure licenses in competitive markets. 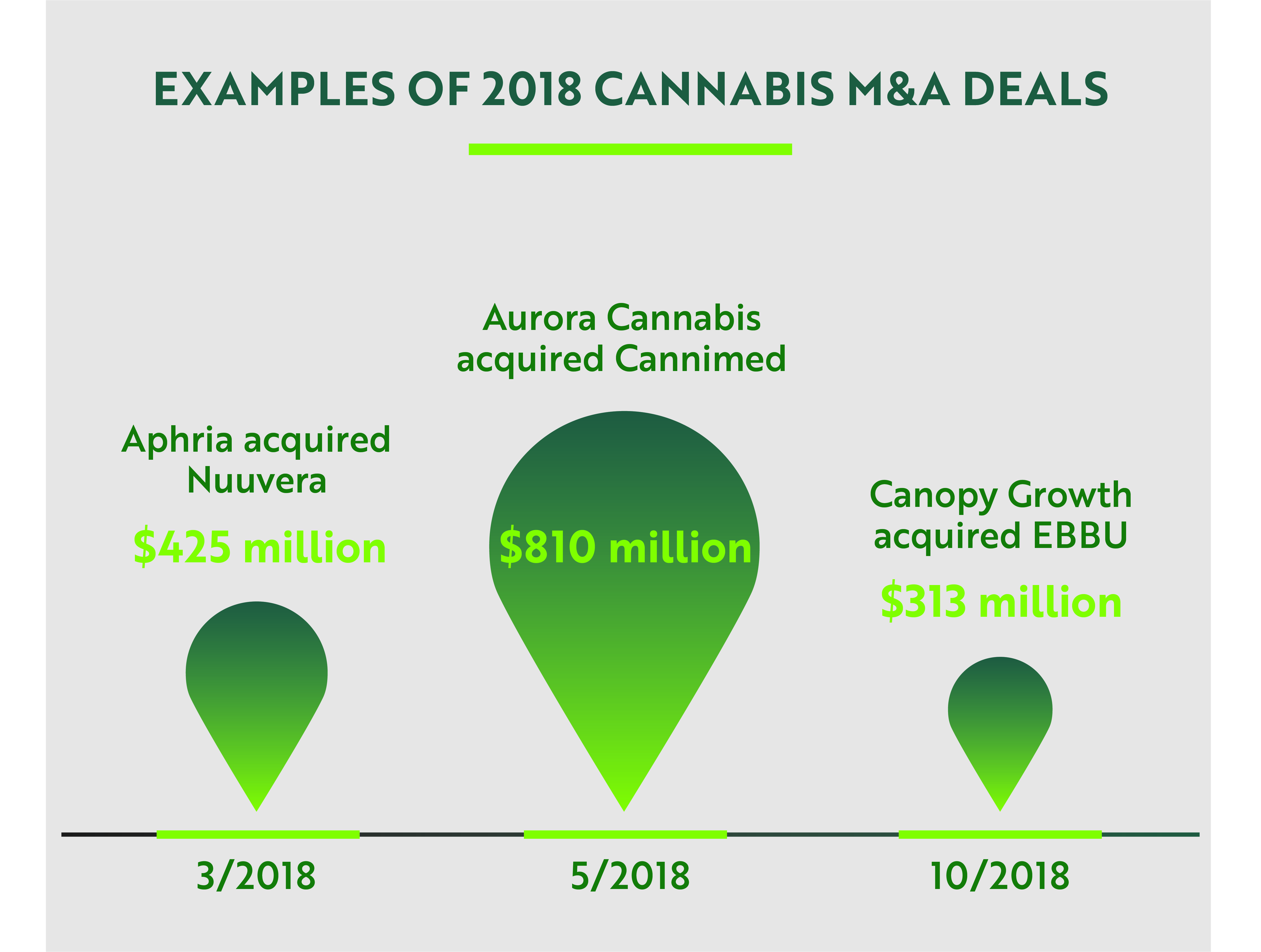 The cannabis “Green Rush” continued into early 2019, as the Global Cannabis Stock Index hit its 2019 peak in late March, but the tone began to shift after disappointing Q1 financial results were released. Over the following months, a number of market difficulties were made apparent. In Canada, where many of the largest cannabis companies (by market capitalization) are based, a number of issues – including slow market roll-outs, regulatory hurdles, operational miscues, and supply chain problems – resulted in lower-than-projected revenue numbers and substantial losses. Adding to the bitter mix were high-profile regulatory violations, and emerging corporate governance concerns. As a result, the risk profiles of many organizations were altered and ambitious revenue and profitability projections were exposed as premature, at best.

U.S.-based cannabis companies endured similar issues and additionally had to navigate the punishing impact of IRC 280e, which creates excessive tax burdens for companies in a complex and evolving environment. With few exceptions, valuations cratered across the industry, mainly dragged down from the fall in the Canadian names. These changes, and increased scrutiny from anti-trust regulators, dramatically slowed down the process of completing transactions. Additionally, continued market and regulatory uncertainty resulted in high-profile M&A deals being revalued or unwound. 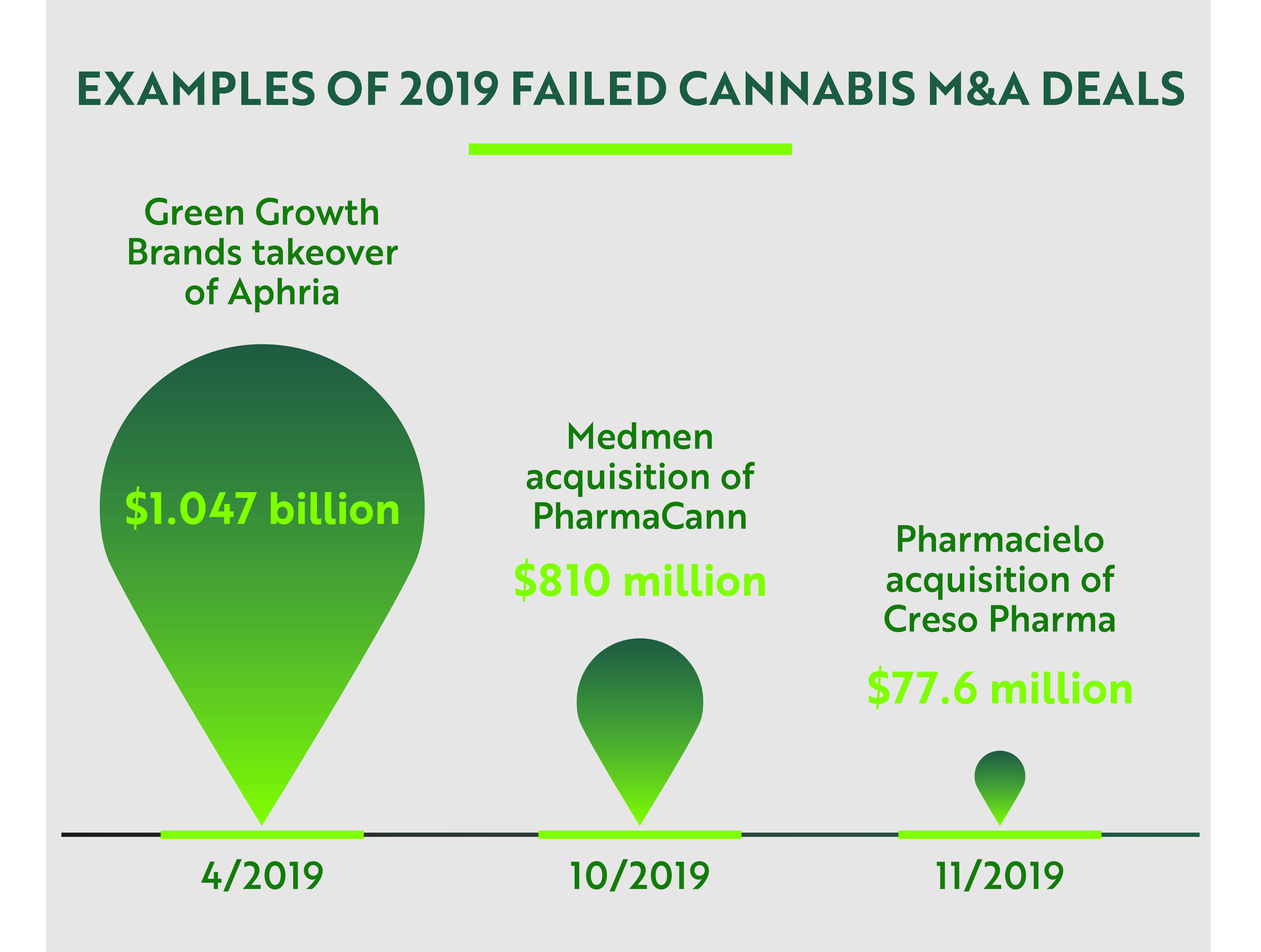 As the glow of the “Green Rush” fades, gone also are casual attitudes toward easy access to capital and operating results. This overall shift in the market perception has been exacerbated and accelerated by the unprecedented socio-economic impact of the COVID-19 pandemic, which caused capital raises and M&A deals to slow down to a trickle.

From our perspective, the tone has shifted throughout the cannabis sector: operators and investors are going “back to the basics.” New M&A deals are being inked, but now at much lower valuations that are adjusted to market realities and prioritize operational efficiency and cash flow.

The purpose of the Cannabis M&A Field Guide is to empower buyers, sellers, and companies engaged in both activities, as they maximize value and build stronger organizations in the emerging industry landscape of cannabis, hemp, CBD and related products and services.