The Time is Now: Supercharge Your GASB 87 Implementation

10 Preliminary Implementation Steps That Will Supercharge Your Action Plan

With an effective date within the next year for some governments (i.e., as soon as January 1, 2020, for governments with a calendar year ending December 31, 2020) – the countdown has begun for planning for the impending changes to accounting and reporting for leases.

Under these new rules, the recording of leases, including assumptions, will significantly impact financial statement amounts and disclosures. Because governments use a variety of leasing arrangements to stabilize cash flows and reduce risk and uncertainty, the new requirements have strong accounting and financial reporting implications requiring a readiness plan. But first, why are these changes occurring?

The Back Story on GASB 87

It is important to have some context for the impending changes. The new statement was created because leasing guidance for state and local governments, as we know it, predates GASB’s existence. Because of this fact, the GASB’s conceptual framework was not taken into consideration, which includes definitions of assets, deferred outflows of resources, liabilities, and deferred inflows of resources. The updated guidance for lease accounting has rectified the situation, which is currently underreporting the economics of a lease transaction.

The new lease accounting standards will replace the current operating and capital lease categories with a single model for lease accounting, based on the concept that leases are a means to finance the right to use an asset. 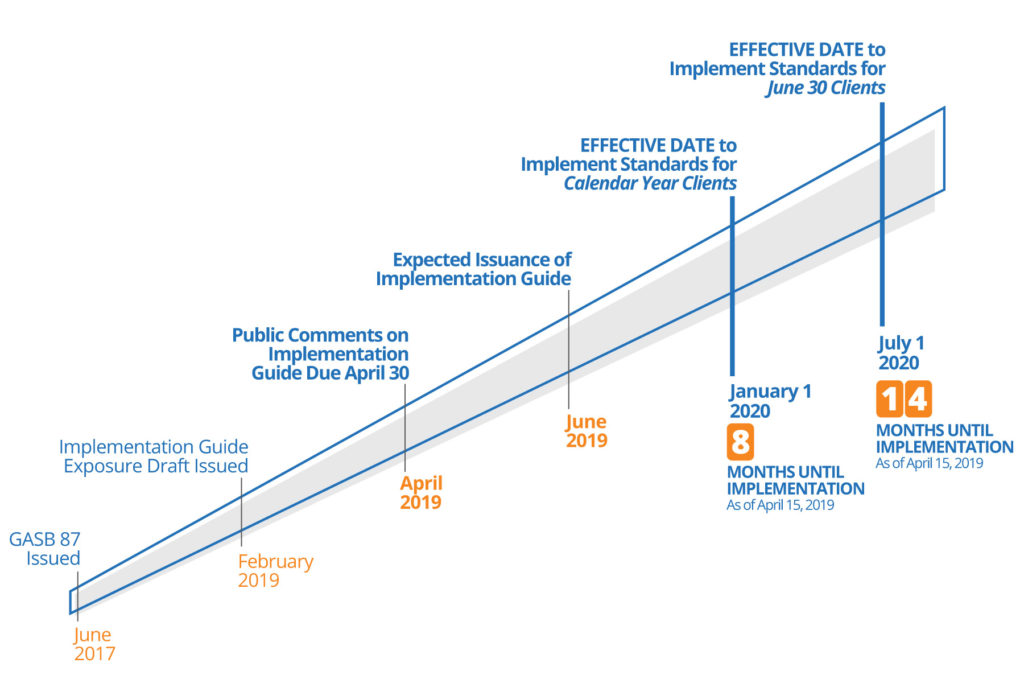 With the effective date approaching quickly, the time to prepare is NOW!

The MGO GASB 87 Implementation Team has created a readiness assessment tool providing 10 preliminary implementation questions for consideration in your planning. These will not only prepare you for the new lease accounting standards, but may uncover matters that were not previously considered or identified.

This 10-step Implementation Plan is more of a general guide designed to assist you in identifying issues and help you organize your implementation process, rather than being an all-inclusive plan with specific technical guidance. As you evaluate the leases that are unique to your organization, you will most likely find that further research and analysis is necessary to ensure proper accounting considerations. For example, if you operate an airport and have aviation leases with air carriers regulated by the U.S. Department of Transportation and the Federal Aviation Administration, it will be necessary to understand how the regulated lease provisions affect your contracts, especially in situations where there are multiple lease components.

Step 1. Know where to find your leases.

It may seem obvious, but the first step in managing your leases is knowing where they are and, specifically, who is responsible for maintaining them. A good place to begin is with organizational charts. This is an example for a municipal government. 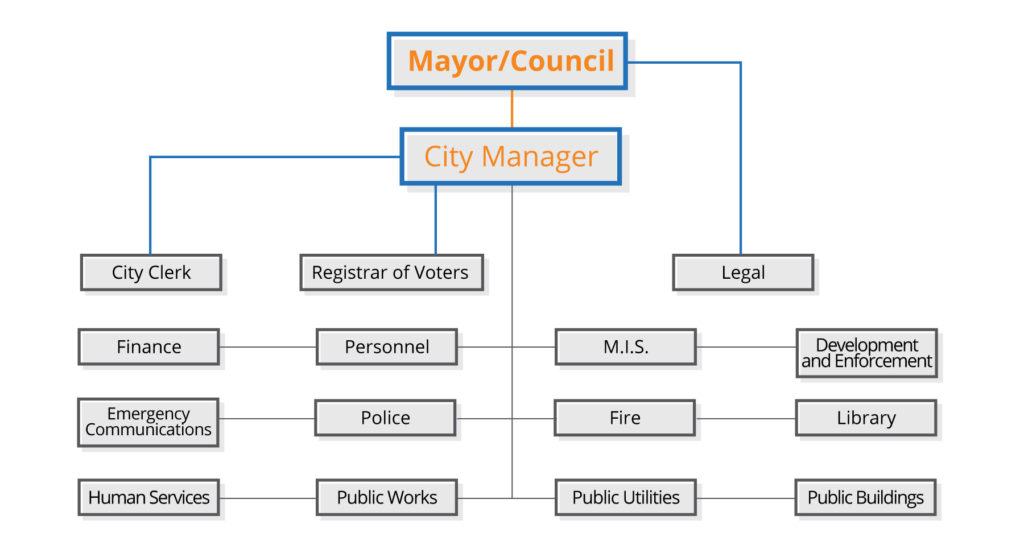 Depending on how your government contracts services, leases may be held centrally within the Finance Department or they may be decentralized in a multitude of departments, and possibly even managed by various entities.
Keep in mind that most leases that were previously expensed as operating leases will need to be accounted for as a lease obligation under the new standards, including option years if you are reasonably certain they will be exercised.

After the “where” has been established you can move into the “what” by identifying the universe of leases for your organization. This can be accomplished by evaluating the general ledger, reviewing contract files and surveying purchasing and operating departments, which leads to assembling a task force and formulating a plan for data collection.

Identify people who are critical to a successful implementation. Consider including operational and legal staff who are already familiar with existing lease terms and conditions. The Lease Implementation Task Force should remain in place until the action plan for lease implementation is finalized. The benefits are many, including a collective think tank to evaluate and apply appropriate accounting treatment to each class of leases. This task force may also be important to developing internal policies and procedures, such as whether or not a materiality threshold is appropriate, and whether or not lease accounting software should be utilized to manage the lease database. Furthermore, the implementation of the lease accounting standards is only a start, proper accounting treatment, including the remeasurement of the initial lease liability when certain lease changes have occurred and the evaluation of new leases subsequent to implementation, will be an on-going requirement.

Converting your lease data into an organized structure is not without its challenges. You may encounter incomplete lease files, “hard copy versions only” of certain lease agreements, voluminous amendments, and the need to translate data from lease agreements into databases. This is all part of the process leading to a successful implementation of the new standards. Once you complete the database, you’ll then need to properly classify the leases.

Step 4. Understand what types of leases do NOT apply to GASB 87.

While a multitude of leases will be impacted by the new GASB 87 standards, there are several classifications that are not subject to GASB 87, including: intangible assets (such as computer software licenses); biological assets, including timber, plants and animals; inventories; service concession arrangement contracts; leases in which the underlying asset is financed with outstanding conduit debt; and supply contracts, such as power purchase contracts. Additionally, nonexchange agreements are exempt: for example, in the case of leasing property to a school district for a reduced price of $1/year for 30 years.

In the end, it is all about evaluating the leases subject to GASB 87.

Step 5. Understand what criteria to use when evaluating leases.

After eliminating leases that are not subject to GASB 87, as identified in Step 4, further classification of leases is necessary to ensure that the appropriate accounting treatment is applied. Short-term leases, contracts that transfer ownership, leases of assets that are investments (lessors only), and certain regulated leases (lessors only) all qualify as leases, but have differing accounting treatments than the typical long-term, noncancellable leases.

A lease term is defined as the period during which a lessee has a noncancellable right to use an underlying asset, plus any extension periods and options that are reasonably certain to be exercised. The GASB wants organizations to consider extension periods and options, so there is no incentive to structure initial lease terms to avoid meeting the definition of a lease. Since month-to-month leases that continue into a holdover period until a new lease is signed are not part of the noncancellable period or a formal extension, there is no basis in the standard for currently including them. Let’s discuss the calculation of the lease liability.

Step 7. The lease liability should be measured at the present value of payments expected to be made during the lease term.

The lessee should initially measure the lease liability at the present value of payments expected to be made during the lease term, which includes the following elements: For additional guidance and context to these bulleted items, refer to GASB 87 paragraph 21. In order to determine the present value, you may need to develop the discount rate.

Step 8. Consider how to calculate the lease liability for contracts with multiple components.

Proper classification of leases is not always straightforward when both lease and nonlease components are included in the same contract. What if a building lease has utilities and common area maintenance costs? The answer can be found in guidance covering contracts with multiple components, which identifies maintenance services as a nonlease component. What if a lease involves multiple assets and those assets have different lease terms? The answer can also be found in guidance covering contracts with multiple components, which provides that each asset should be accounted for as a separate lease component. Many rental leases embed the cost of utilities and common area maintenance into the lease payment. Contract components should be separated using the best estimate available based on observable information. If it is not practicable to estimate these separate costs, then account for the contract as a single lease unit (see GASB 87 paragraph 67).

Step 9. Measurement of the leased asset.

The initial measurement of the leased asset should be based on the measurement of the associated lease liability. In the case of contracts with multiple components, the value of the underlying leased asset is not always clearly stated in the agreements, and many lease agreements will not cover the life of the leased asset. Some leased assets may involve proprietary information that lessors are not willing to share. Therefore, determining the value of the underlying asset is not always straightforward in these cases. Whenever possible, identifying comparable assets that are sold in a market transaction is an important part of the process. You can then utilize the knowledge of internal or external experts who can provide a basis for an estimate.

You are now ready for the final step.

Step 10. Define the threshold for recording leases in the financial statements.

Unfortunately, while GASB provides explicit guidance on capitalization thresholds for capital assets, it does not specify any such consideration for lease obligations. Using a threshold may help you avoid recording leases that are immaterial and avoid a mismatch with leased assets that are too small to capitalize. A good starting point may be to use the capitalization thresholds that are already established for your organization. Once you determine your initial criteria for establishing leases, verify that it does not exclude significant leases from application of the new standard. You can revise these thresholds as needed. Now that we have provided you with our 10-step GASB 87 readiness plan, you should have a fairly good idea what your next steps will be.

So you can plan for compliance, this is an excellent time for the MGO GASB 87 Implementation Team to review your leases. This will ensure that you are ready to take the most important step: Implementation. In addition, we have put together an online readiness assessment that helps you evaluate where you stand in the implementation process. 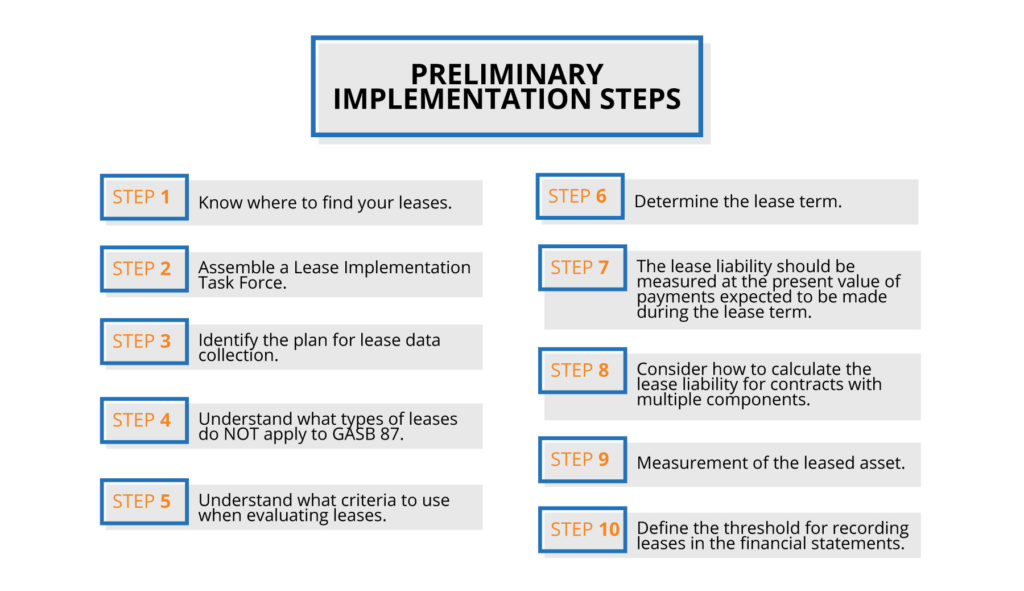 David Bullock is a thought leader in MGO’s State and Local Government practice. An Assurance and Government Advisory Services Partner with 25 years of professional experience, he currently oversees numerous audits and other services to governmental organizations throughout California. In 2018, David was appointed to the AICPA State and Local Government Expert Panel. He is also on the Governmental Accounting Standards Board’s (GASB) Financial Reporting Model Reexamination Task Force. In 2018, he was appointed to the California Society of CPAs’ Governmental Accounting and Auditing Committee. His numerous presentations cover topics related to generally accepted accounting principles promulgated by the GASB, and auditing standards, promulgated by the AICPA and the GAO.