Does $80B in Funding Mean the IRS is Coming for Your Money?

The Inflation Reduction Act of 2022 was recently signed into law with an eye-opening provision: the inclusion of nearly $80 billion in additional funding for the Internal Revenue Service (IRS). $45.6 billion of that is earmarked for IRS enforcement, which will be used to help the underfunded agency hire additional staff and conduct future audits in the hopes of collecting unpaid taxes.

Many publications cite the IRS plans to hire up to 87,000 new employees, though the actual number will be released in the coming months. These new hires will fill positions ranging from auditors to customer service representatives to IT specialists. The IRS has been plagued by more than a decade of budget cuts, which has limited its ability to modernize its old technology and staff appropriately. Since 2010, the agency’s enforcement staff has declined by 30%. The funding appropriate in the Inflation Reduction Act hopes to reverse this trend and bring in an estimated $203 billion in increased revenue.

The MGO Tax Controversy team breaks down what you need to know about this big change that could increase your risk of an audit. 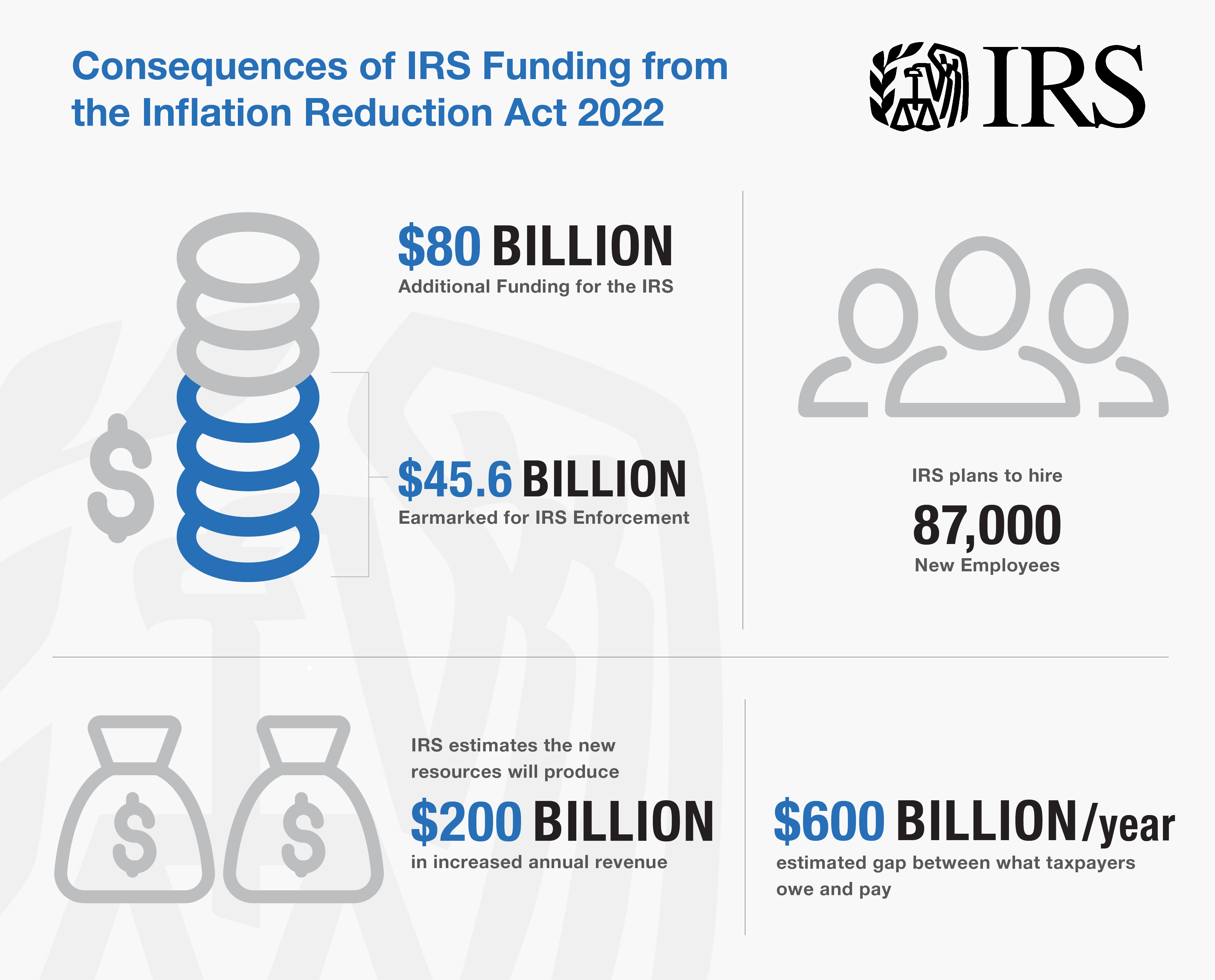 How will the increase in IRS staff affect taxpayers?

Critics of the increase in IRS funding have claimed that the new resources will be used to target low to middle-income Americans and small businesses, burdening them with more audits and examinations. The Treasury Department refutes these claims reiterating they plan to focus primarily on large corporations and the wealthy — those more likely to evade paying their taxes — to close the tax gap, or the difference between what taxpayers pay in taxes and what they actually owe – an estimated to be $600 billion per year .

The IRS hopes the investment in funding will bring in around $203.7 billion in revenue because between 2015 and 2019, IRS audits declined significantly – 75% for Americans making $1 million or more and 33% for filers with low to moderate incomes. Lower income Americans are mostly wage earners, so their audits are less complex and can be automated. However, more complex filers, notably large corporations and high-net-worth individuals and families – require the hands-on engagement of IRS agents and are most likely to experience increased levels of scrutiny from the new hires.

Ultimately, the average taxpayer should have an improved tax filing experience. New staff will be on hand to answer questions by phone, technology systems will be improved and modernized, and the backlog of unprocessed returns should diminish.

What is the timeline for implementing these changes?

While there is no set timeline, it is likely the way IRS audits work will change with the increase in funding. Currently, software is used to rank each tax return with a numeric score, and higher scores trigger an audit. Other mechanisms the IRS uses to determine candidates for audits include enforcement initiatives referred to as “campaigns” based on various criteria. The new funding will take time to phase in, and so will the hiring and training of new workers. It is expected new auditors will complete a six-month training program, starting small with cases involving a few hundred thousand dollars instead of tens of millions. Forbes performed some creative math to conclude while the funding will increase IRS audits, it is not likely to occur for the next few years.

How can I avoid future audits?

The best way to avoid an audit remains simple: pay your taxes on time and in compliance with tax laws. Simple accounting and documentation best practices are your best friend. If you feel you are at risk for a potential audit, you’ll want to get a head start now by ensuring your records are accurate and have been updated and maintained. Save your receipts and include every detail you can in your bookkeeping logs. If you do get audited in the coming wave, you’ll be glad you have all of this information organized and on-hand.

Our perspective on the increase in IRS staffing

The IRS has long been criticized because of their inability to provide taxpayers with the level and quality of service they deserve. The increase in funding as part of the Inflation Reduction Act should help. On the other hand, the number of tax audits is likely to increase, and you will want to be ready.

MGO’s dedicated Tax Controversy team can help by providing a holistic look at your tax filings as well as provide guidance for conflict resolution. From prevention to resolution, we guide you every step of the way.

If you’re an operator or investor in the cannabis industry, our Tax Practice recently published the Cannabis IRS Audit Survival Guide, which details everything you need to do to prepare for and navigate a tax audit. You can download the Guide for free here.

T. Renee Parker is a Tax Partner and the National Tax Controversy Practice Leader at MGO. With over 15 years of tax controversy experience, she is a member of the IRS Tax Advocacy Panel and is well-versed in all areas of tax controversy. These include but are not limited to U.S. federal, state, and local tax audits; sales and use/payroll tax audits; international tax compliance related audits; negotiation and settlements with tax authorities; and corresponding and negotiation with tax authorities. Contact Renee at RParker@MGOCPA.com.